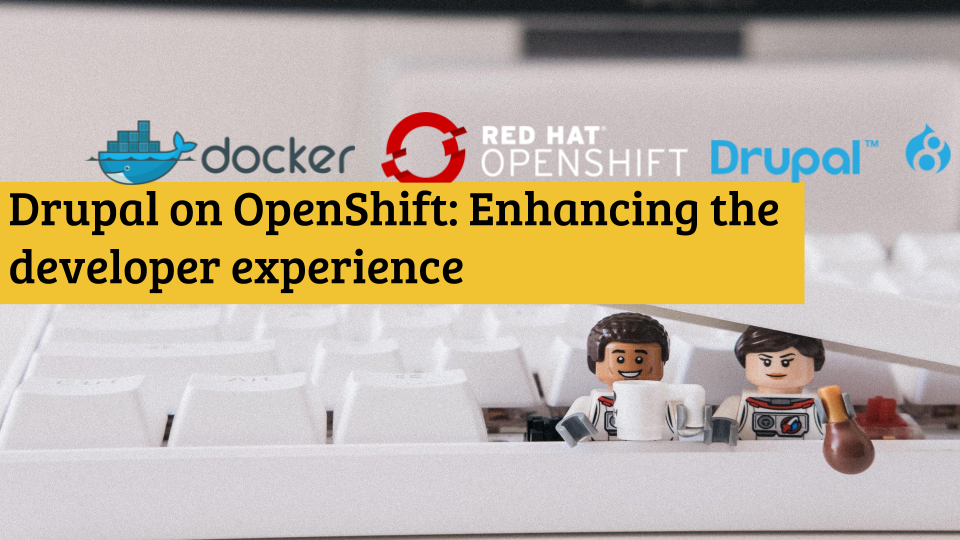 Learn how to automate all the pieces once you deploy your first Drupal 8 site on OpenShift.

We walked through a detailed Drupal 8 deployment on OpenShift. We just scratched the surface of OpenShift and didn’t explore all its features. In this post, we will further this setup by enhancing the developer experience in using OpenShift.

We encountered what a service and a deployment config are in the previous post. Allow me to introduce a new resource called the buildconfig. A deployment config tells OpenShift what to deploy(by providing the image and tag, the number of replicas etc.), when to deploy(when the image changes, or when the config changes, like the number of replicas) and where to deploy(using node selectors). In a similar way, build config tells OpenShift how to build the image required to deploy. A build config is mostly one of 2 types. A docker based build and a source to image build. We will look at the docker based build first.

We previously passed a pre-built container image to our Drupal deployment config. We can take it a step further and pass this job to OpenShift. To do this, we create a build config resource with a “docker” strategy.

The docker strategy of the build config indicates that a new image with the name drupal-openshift and latest tag will be built and pushed to the internal docker registry of our cluster. The rest of the workflow remains the same. This newly built image will automatically trigger a new deployment, which will create new pods with the new image and so on. We’ve just offloaded the first step of the workflow to OpenShift.

The docker strategy tells you what Dockerfile to use to build the resulting image. In our case, I’ve checked in a Dockerfile in a top level directory called deploy/.

Unlike our previous docker builds, we need not clone the repository, we just copy the source code over to docroot.

Create the docker strategy based build config resource in OpenShift.

Tail the logs to see how the image is built.

You will have a new app up in minutes.

One aspect I dislike about docker strategy is it requires some level of devops literacy from your team and some spills over some deployment context into your code base. We can minimize both these pain points by using a source strategy.

A source based strategy also builds a container image and pushes it to the cluster’s registry, but in a completely different style. It contains information about your source code, i.e. what is the git repository URL, which branch etc.

When you trigger a source strategy based build, OpenShift fetches this code, assembles it on top of a base image and creates a new image. This base image is called, in OpenShift lingo, an s2i image. The s2i abbreviation stands for source2image. I’ve extensively covered how s2i works and how to build a custom s2i image previously. In a gist, here’s what an s2i workflow looks like:

Some things of note here.

I’ll write a future post on how to make this work with Gitlab, Bitbucket and private repositories.

I’ll explain the Github trigger secret later in this post.

3. The incremental: true line in the build config will help us speed up builds. We’ll see that in a moment.

You can start a build using the oc start-build command. But here’s what makes build configs cool, it will trigger builds automatically the moment you git push your code, just like Heroku!

A source based build config achieves this feat by exposing a build trigger endpoint. This can be added as a webhook in Github at your repository’s settings.

Now, it is highly likely that you are running this OpenShift setup in a Minishift cluster. Your webhooks won’t work in that case as your Minishift URL is not a publicly exposed one. We bypass this by using a clever tool called Ultrahook. Ultrahook is a free tool which forwards all hook requests to your localhost. Once you sign up with Ultrahook, they’ll provide you a namespace and an API key. We configure our setup so that when a push happens, Github fires a webhook to the Ultrahook URL, and we have a local ultrahook client which captures this and forwards to our Minishift cluster.

NOTE that you don’t need to use this setup if you are running an OpenShift cluster in the internet instead of localhost.

The ultrahook client is ruby based, and chances are that you don’t have a Ruby setup on your local. I’ve created a minimal docker image for running ultrahook, which we will use for this demo.

Assuming you have docker installed on your laptop, signed up at Ultrahook and got your namespace and API key, you run this command.

This will run in the foreground. Now go to Github and add the http://github.<your-namespace>.ultrahook.com/ URL as a webook.

This will trigger a webhook and you will notice that your client received it and forwarded it to OpenShift. The random set of characters in the URL is the Github webhook secret we configured in the build config earlier. This is used to differentiate between various apps in the same cluster which use the same codebase.

You can see that a new build is triggered by running,

This will push a new image of drupal-openshift, built this time using s2i, and will trigger a new deployment.

OpenShift allows you to speed up your builds and reduce build time by saving artifacts across builds. In our case, this will be the vendor/ directory that gets generated when you run composer install. This is an optional step which you can bake in as part of your s2i image. Note that most of the save-artifacts scripts which I’ve encountered didn’t work on Debian images. I wrote my own in Python instead of the regular tar tool and shell. In case you are using the regular tar tool and are not able to generate artifacts, you can use this instead.

Also, you have to set incremental: true in your source strategy spec of your build config for the builder to call save-artifacts. On your first successful build, it will save a tar of your vendor directory. The next time you run it, it will retrieve this tar archive instead of downloading it again.

NOTE that you can achieve git push based deployment using the docker strategy also, although I’ve not tried this method.

We rolled up all the resource YAML definitions into a single file and ran oc apply -f <filename> so far. Every time we want to launch a new application, we have to open this file and edit stuff, like the source code, application name and generate new secrets every time we create new apps. This is,

OpenShift provides a resource type called template. A template is the same as an all-in-one resource file, except that it can be parameterized and namespaced. A template can also help you create an app from the UI as well, which we will see shortly.

Let’s try and create a new OpenShift template for our Drupal app. We first need to create a template file by adding a template resource definition at the very top.

If you observe closely, you can see that I’ve used a variable ${NAME} instead of a hardcoded name. This is furnished to me by the template as a parameter and will be substituted with the value I provide for NAME when generating a processed template.

I have to remember to handle 3 more resource definitions to this template file.

You can see that this build config contains 5 variables which are parameters and can be provided before creating the app while processing the template.

There are 2 kinds of parameter variables, the plain ones and generated ones. The name in the above code is an example of a generated parameter which appends a 6 digit hex value to the base drupal-8-. All parameter values can be overridden when processing, and take the default value if nothing is given. Let’s process the parameter and generate a ready to deploy file.

This will generate a JSON blob which we can readily “oc apply”. I mentioned before that template is also a type of resource in the OpenShift ecosystem. You can do,

Creating a new app from the OpenShift template

Let’s create a new Drupal 8 site from the above template in command line. Before you do that, you have to ensure 2 things.

Now, the actual template creation part where we pipe the generated JSON to “oc apply”.

The first build will still be triggered manually.

After a few minutes, the route will be up and you will be well on your way to install Drupal.

Later builds will be automatically triggered when you do a git push.

You can make use of templates via the UI as well if that’s your thing. When you are logged in to the web console, you can see an option to add a new template to the catalog here.

Go ahead and add your template. You will get an acknowledgment like this.

And create a new app from the comfort of your UI!

We have automated all the parts of a Drupal 8 workflow in OpenShift. But there’s still scope for improvement. For example, how can I deploy a Drupal 8 site with a custom docroot other than web? How do I run cron jobs? How to add another service to this, like memcache or elastic search? Also, there’s this favorite feature of any PaaS, i.e. review environments. Per branch instances of your Drupal site. We will be addressing all these and more in our next post!

Drop us email at jobs@concinnitymedia.com .
View All Jobs